A challenge to the Dawn Company from Vicomte Alexandre d'Avigné 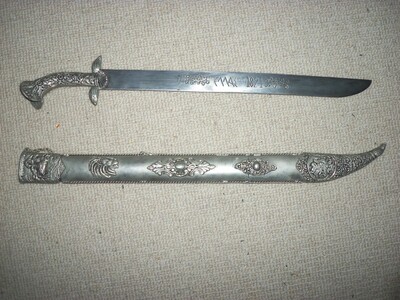 The story goes something like this: about forty years ago, in the Barony of Caerthe, in the Kingdom of the Outlands, or perhaps it was still a Principality, there was a fighter practice held in a park during the summer months. As such practices will, it attracted the occasional passers-by who watched and commented and asked questions. One day, one such person appeared and watched, and asked questions, and then went on their way. They returned some time later with Bearclaw, saying words to the effect of, 'I've had this for a while, but it seems like it would be better off with you.' They gave Bearclaw into the keeping of the Barony and, to the best of my knowledge, no one has heard from them since.

Shortly thereafter, Iric Iulian of Black Elk started the No Heralds Tourney. The winner was selected from among the competitors by a panel of judges who based their decision on the combatants' chivalry, courtesy, and panache, and not merely on prowess and wins in the tournament. The victor won the right to carry Bearclaw for about a year until the next tourney. This tourney tradition carried on for perhaps a decade, and I was very pleased to be named the victor at what turned out to be the last No Heralds Tourney held. For the next thirty years or thereabouts I have carried Bearclaw with me on my travels, feeling all the time that it really should still be a travelling trophy.

Would you like to carry Bearclaw? Well, come and take it from me!

I present to the Dawn Company The Bearclaw Challenge, which shall be conducted under the following rules:

A downloadable version of the challenge